On Monday February 27, 2012, Louis Cammarosano, General Manager of HomeGain, was a guest on the Real Estate 360 Live radio show on The Big Talker 1580 WHFS AM, hosted by Ryan Sloper.

Louis and Ryan discuss the $5 billion suit against the banks for wrongfully foreclosing on homeowners. Louis notes a moral hazzard is created when companies and individuals are bailed out. Louis notes that when you keep interest rates artificially low borrowers have no incentive to pay off debt earlier and no incentive to save. Low interest rates urge consumption and borrowing. Louis notes that rising gas prices have little to do with speculators or problems in the Middle East but rather the decline in the value of the dollar.

END_OF_DOCUMENT_TOKEN_TO_BE_REPLACED 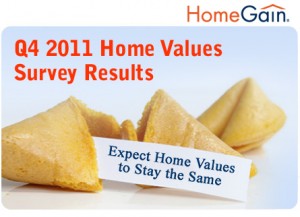 Forty-two percent of real estate agents and brokers and 37 percent of homeowners think that home values will decrease in the coming six months.

In the third quarter 2011 HomeGain National Home Values Survey, forty-seven percent of agents and brokers and 45 percent of homeowners thought that home values would decrease over the next six months.

“Homeowners and real estate professionals appear to be in sync regarding the direction of home prices. Home buyers and sellers, however, continue to remain apart as to home valuations with the vast majority of homeowners thinking their homes are worth more than their agents and the market are telling them,” said Louis Cammarosano, General Manager of HomeGain. 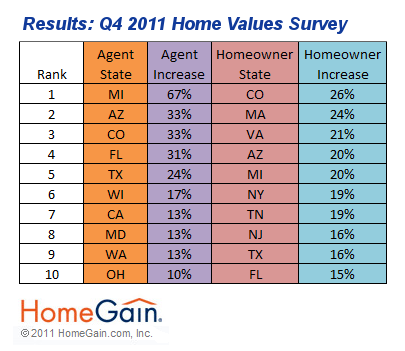 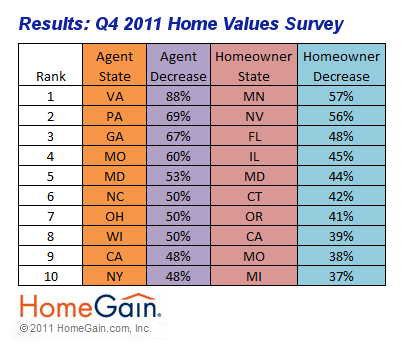 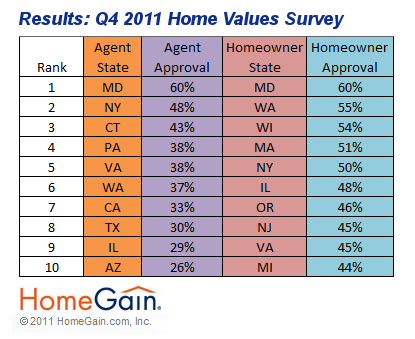 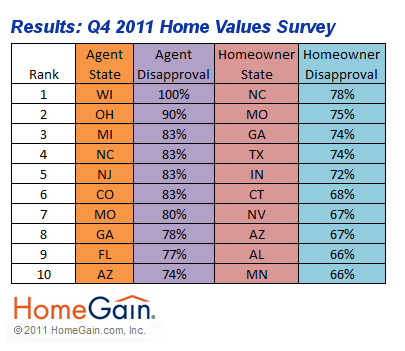 The fourth quarter 2011 regional results are available by clicking here.

END_OF_DOCUMENT_TOKEN_TO_BE_REPLACED

Below are the regional results of the entire survey, categorized into four regions*, Northeast, Southeast, Mid-West and West. You can also check out the national results of the HomeGain 4th quarter 2011 home values survey. Questions and Regional Results

END_OF_DOCUMENT_TOKEN_TO_BE_REPLACED

On Monday September 26, 2011, Louis Cammarosano, General Manager of HomeGain, was a guest on the Real Estate Radio show on The Big Talker 1580 AM, hosted by Ryan Sloper.

Ryan and Louis discuss the impact that a winning sports team has on a city. Louis and Ryan discuss the Fed’s Operation Twist announced earlier in the week designed to keep long term interest rates low. Ryan notes that he doesn’t think it will do much good due to tighter lending standards. Louis notes that Operation Twist did not increase the Fed’s  balance sheet and comments that the net effect is to kick the can down the road and to make the road longer. Louis notes that the Fed’s maneuver protects itself against raises in short term interest rate. Louis notes its generally good for real estate as it drives the long term interest down but if credit is difficult it will be difficult to take advantage of. Louis noted that Operation Twist will make it easier for homeowners to refinance which isn’t necessarily good for the banks. Louis notes that the Fed’s action was not positive for the markets as more quantitative easing was expected. Louis notes that stimulus and interest rates are not the answer as we have had plenty of that in the past few years to little or no salubrious effect. Ryan notes that the expensive real estate market is robust while the less expensive real estate market is still doing poorly. Ryan notes that the DC metro housing market is doing well due to the decent jobs market and the relatively low level of foreclosures. Ryan and Louis discuss the pros and cons of purchasing a new home vs. an existing home. Louis and Ryan discuss the pros and cons of purchasing a short sale vs. a new home. Louis notes that the new home market is more important to the economy than the existing homes market and that each new home built creates three new jobs.

END_OF_DOCUMENT_TOKEN_TO_BE_REPLACED

Consumers Want Consultants, not Cheerleaders – Position Yourself as a Market Expert

Today’s real estate market is different than just a few short years ago. Before the downturn, seller’s knew they could sell and buyers didn’t worry about risk in real estate because everyone believed prices would always go up. If Buyer A didn’t want the house, you need not wait long before Buyer B submitted an offer. When the market began the turn as demand shrank and prices began falling, many agents made, what I think was a big mistake – they acted like cheerleaders. Instead of offering professional advice to a growing number of upside down homeowners in a confusing market, it seemed as though agents across the country were using their marketing materials to look out for a paycheck more than trying to help consumers 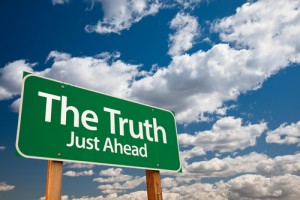 You may remember ‘Baghdad Bob’ from the Iraq War days holding press conferences where he would tell everyone how the Iraqi Army was destroying the infidel Americans and pushing them back to the sea. You could also almost hear the American tanks rolling by in the background as he was on TV. He wasn’t telling the truth. Everyone new he wasn’t telling the truth. Jay Leno had a great video of Baghdad Bob if you don’t remember.

Even in today’s real estate market, it’s still common to see agents say “It’s a great time to buy!” That has to be the worst possible thing we can say in this market. It’s so transparent – and it appears to be looking out for the agent and not the consumer to market with this message. Don’t be a real estate Baghdad Bob. The market may not be great for many potential buyers. If a consumer asks about the market or you are trying to convince someone that this is a great time do buy, you have missed the mark. Consumers want and need information more now than ever. They seek out agents who can distill information in a way they can understand and they want the truth. They also can sniff out Baghdad Bob the real estate agent a mile away. The truth is, it may not be a great time to buy. Maybe it is, may it isn’t. Don’t you think you should find out a little more before spouting off like that? Be real.

END_OF_DOCUMENT_TOKEN_TO_BE_REPLACED

Posted by: Ryan Ward on March 11th, 2011 under Best Practices

With the economy uncertain, but interest rates low and foreclosures still making up a large percentage of available inventory, what do real estate professionals think about homeownership for their clients?

What do potential homeowners think?

Is homeownership still the best investment?

Are home prices going up or down?