The weekend before last, (April 10-11) was National Open House weekend.  Pushed by local Realtor associations and brokerages, this was to be an all out assault meant to encourage home buyers to take advantage of current low interest rates, high inventory (in some areas) and the federal tax credits (only good for contract through the end of April). 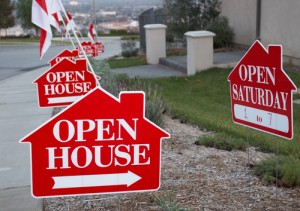 But was it a good idea?  And did it work?

In the Washington Metropolitan area, I will go with an unequivocal no…and no.

We are fortunate to be in a market that is clearly recovering.  As an indication, lenders are giving many “close-in” DC neighborhoods the stamp of “stable” — up a notch from the previous designation of “declining”.  We have been seeing the return of multiple offers on properties that are well priced in many localities.

So what did National Open House weekend do for us in the close-in DC Metro area?  Well, it surely made many employees at The Washington Post happy, where open house ads took up more space than we’ve seen in over a year.  The result?  A perception of a higher absorption rate that diluted the number of potential buyers going to each open house.

The “Open HouseFest” vs. The “After Party”

One of my sellers REALLY wanted me to hold his house open last weekend because he thought that his garden was looking particularly beautiful.  He owns a home in a highly desirable area of Northwest Washington, DC and the house itself has tremendous curb appeal.

I suggested waiting for numerous reasons and National Open House Weekend was at the top of the list.  Motivated buyers will get out there…but they only have that 3-4 hour span to do it.  So why play in traffic when you can showcase a home in a much smaller pool without the “fire-sale perception”?.

It’s typical to see an “off” weekend following such a high inventory “Open Housefest”.  I’ll go out on a limb and bet that this smaller but more focused open house roster will bring in more prospective buyers than the “open housefest” because:

Real Estate is Not National!!

The close-in DC Metro area was doing just fine before this “promotion”.  Are there areas selling better and worse than others?  Sure.  And that’s precisely the point.  National real estate “promotions” of this ilk inherently fail (for many) because real estate is inherently local.  Each city exists with different trending and sales patterns.

Perhaps it’s time for National Open House Weekend to turn down the volume — let local experts promote their respective areas/properties in a way that they know resonates for prospective buyers in their particular markets.

All this said, any success stories from other parts of the country?

One Response on “National Open House Weekend – Promotion At Its Worst?”

I agree. The perception in this case is the key. But I have never been a big fan of open houses, so I may be somewhat biased.