Used to be not having a net was a sign of your proficiency. Back in the day before a thousand people got killed an hour in television dramas, people looked to other means to get their “need for a buzz” satiated. Who can forget August 7, 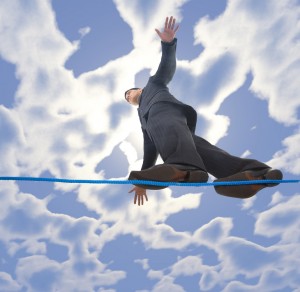 1974, when high-wire performer Philippe Petit amazed the residents of lower Manhattan by going for a high wire stroll between the twin towers of the World Trade Center. Without a net.

It’s different today. Now we watch things like this every day on TV, and, after the person falls to their death, we see close ups of the gore as CSI teams come in and prove it was actually murder, not a gust of wind that caused the latest victim’s demise. The thing that used to make these types of events so thrilling was the fact that the deed was done …

Nowadays, circus unions ensure that nets are in place to protect the safety of the participants. The thrill is gone because the potential of possible demise has been replaced with the theatrics of flawlessly executed maneuvers done with ever increasing degrees of difficulty, outlandish costumes or a combination of both. It’s just not the same.

There is still, however, an arena where participants still perform their death defying acts without a net. It happens every day, and it’s far more common than many realize. The arena is real estate, and the performers are …

A strange thing happened a few days ago. Someone tried to send me a fax. It’s not that I don’t have a fax machine. I have a really nice one, in fact. I just don’t use it anymore. There’s no need to. Why would I want to receive a crooked document in black & white at 200 DPI with no chance of reprinting it should 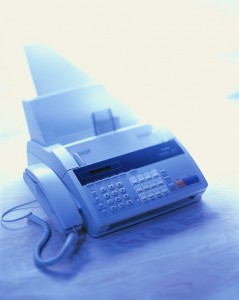 Another odd thing happened a few weeks ago. I had a real estate agent call me up and ask if I had a few extra copies of a purchase agreement. Seems he’d run out, and couldn’t write up an offer until he had had one. I thought for a second or two, then said, “Come on over – I’d be glad to hook you up!” I logged onto ZipForms, printed some blank purchase agreements and disclosure forms and handed them to him as he came through the front door. He looked at the docs, looked at me and then said, “You used ZipForms!” Outwardly I replied, “Sure did!”, but on the inside I was saying, “Yeah … DUH!! And you didn’t because…?”

It never dawned on him to do so.

He’s one of many REALTORS® in the area who are functioning … without a net. The INTERNET. That vast interconnected web (invented by Al Gore) that hooks all of today’s commerce and society together in ways unimaginable just a few short years ago. It has totally transformed real estate and, like it or not, we’re not going back to the “good-old-days.” And, quite frankly, as a web-based REALTOR®, I’m SO glad we’re not! I can’t image doing business any other way. I got into real estate at the very beginning of it’s migration onto the web, and, quite frankly, don’t know how to do the business “old-school.”

Yet there are large groups of Realtors who have still not embraced the internet in any meaningful way. And they are being left behind in the dust of the stampede of agents who’ve figured out that the internet is the modern interpretation of the Serengeti watering hole – like it or not, dangerous or not, they have to go there or they die.

A few things have happened since the dawn of interconnectivity and, in my opinion, if REALTORS® don’t grasp these basic tenets, their businesses will be doomed to oblivion. There are obviously exceptions to this: one would be the REALTORS® dealing with the diminishing groups of senior citizens that still don’t have computers. Even then, many seniors are becoming very tech savvy and increasing numbers are utilizing websites such as internet dating services to put a bit more sizzle into their retirement years.

1.    The SPEED of business has increased.

With internet based information, data management, forms, picture management, email, texting and even signing services such as DocuSign, you no longer need to drive across town to access information, deliver it to your client, generate documents and get signatures. What used to take hours now takes mere minutes, regardless of where on the globe your clients are situated. And clients are now insisting on more information delivered through email or websites so they can respond quicker to market conditions. Agents that don’t understand this and adapt will simply not have enough time to do a high enough volume of transactions to survive. I know agents who don’t check their email every day, let alone have it delivered to their phones.

2.    The STYLE of business has increased.

As consumers demand more information, real estate professionals are stepping up and delivering. It’s becoming unimaginable to find a listing online with no picture, let alone no dedicated website, virtual tour and so on. Agents are now being evaluated on the “style” they bring to a listing, not just the fact that they sold a few properties down the block within the past few years. And many are utilizing Facebook and Twitter as core components of their business as well.

3.    The SPHERE of business has increased.

Instead of real estate agents being “area experts,” many are becoming regional experts. This has been facilitated by internet presence: we no longer need to rely on pictures on local shopping carts or bus stop benches when we can have our information plastered all over the ether. Instead of focusing on a small geographical farm, the web has allowed many agents to expand into other cities with little or no effort at all. In large metropolitan areas such as the San Francisco Bay Area, many REALTORS® service multiple counties, and do so with relative ease.

4.    The QUALITY of business has increased.

Web-based tools and services have allowed agents to provide a far higher quality of service in less time and with less effort. A great example would be services like Postlets which take a basic post to Craigslist and not only pumps up the quality of the ad; but syndicates it at the same time. Space doesn’t permit a list of similar services.

5.    The PRACTICALITY of business has increased.

Many agents now depend on the internet not only for visibility for themselves and their listings, they get their leads there as well. With changes in our society, traditional real estate neighborhood farming methods are becoming substantively more difficult. People no longer answer their doors. And instead of people wasting gas to drive through neighborhoods, they now find properties online, go through the “Virtual Open House,” then click through to a REALTOR® to view the home. Sites such as Realtor.com, Trulia and Zillow are leading the pack, and are constantly upgrading the level of information they provide. Trulia steps it up a notch by providing a Question & Answer forum in addition to providing REALTORS® with a blogging platform. Additionally, sites such HomeGain.com provide numerous opportunities for agents to generate online leads, get web exposure and marketing tools to expand their business. We get a significant portion of our business from online leads, and that percentage is growing every year.

With the current market challenges, the gap between net and non-net agents is increasing. I’m concerned as I see many local REALTORS® unwilling to make the necessary jump into the internet arena. Google many of their names and, as far as the internet is concerned, they simply don’t exist. In my opinion, they cannot continue in the same vein and hope to survive.

In today’s marketplace, increasingly “No Net” is not a sign of proficiency. It actually means …

Fun article! Thanks for sharing. It is an exciting, sometimes breathless, time to be working in real estate. I agree, glad to be leaving “old school” behind!