Takes up Residence in New Home Built By HomeGain Employees

Max, the HomeGain Gorilla, returned home today from an extended trip where he was visiting distant relatives in the Volcano National Park in Rwanda. Late last month, Max’s motor tour was interrupted and he was shuttled out of the country as a precautionary health measure to ensure he would not have a repeat episode of the severe reaction he had when HomeGain announced the launch of Agent Profiles. When Max learned of the agent profile feature and the attendant media frenzy, Max suffered heart palpitations and fell out of his tree. 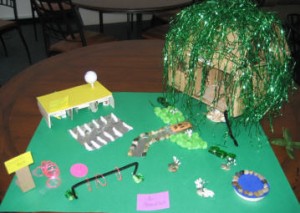 HomeGain General Manager, Louis Cammarosano, stated, “Upon his return to Emeryville, Max was informed of the news of the launch of the HomeGain Agent Blogging Network under the supervision of his personal veterinarian, Dr. Wolliz.” Max appeared to take the news of the HomeGain Agent Blogging Network launch in stride commenting, “I am not surprised at all. I’ve come to expect immense innovation from HomeGain. Please pass the jelly beans.”

Max was also informed that the HomeGain employees had built Max a house to specifications he had submitted in an AgentEvaluator proposal. Upon seeing his dream home that had been lovingly created by HomeGain employees especially for him, Max burst into tears. Max’s new home (pictured here) is a single family detached house. It has a jungle gym and is close to Gorilla friendly businesses like the Banana Republic, a Jelly Belly outlet and a few Coconut Milk Bars.

Max’s homecoming however, was bittersweet, as it was marred by some scandal mongering that occurred while he was away. The scandal sheets inferred that Max had been leading a wild and primitive life that included a “banana pulp addiction” and trysts with some of Hollywood’s top party gals.

Max’s publicist, Simon Ailurt, refused to respond to the allegations simply stating, “None of these things could have happened as Max was out of the country at the time.”

Max admitted that “it’s not easy being a gorilla in a human world” but denied that he was engaged in any wild and primitive behavior.

Max stated, “It’s good to be home. I really appreciate all that work that the HomeGain employees have done not only to make me feel at home but to MAKE me a home.”

One Response on “MAX Returns Home”

Ahhh… the old “out of the country” excuse. Is that code for “rehab?” So very PR rep of you. Is that an AA chip I see on the floor of that Homegain Home? Welcome home buddy. I know your career will flourish now- all the best stars do their stint in rehab.