An interview with George F. Babbitt

I had the opportunity recently to conduct a phone interview with George F. Babbitt of Babbitt-Thompson Realty Co. to find out how the Zenith real estate market is doing. We were interrupted quite a few times as George tended to his incoming messages and alerts. I’ve published our interview in its entirety. 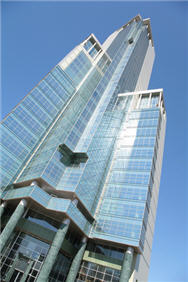 HomeGain: Hi George. How are things going?
George Babbitt:Could you hold a minute?
HG: Sure.
GB:I am in the middle of a Twitter, a useful tool by gosh, by jingo.
HG: I’ve heard.
GB: You bet, the sooner people realize that they aren’t going to be coddled, the sooner they’ll get on social networks and start producing. You have to tend to your business ALL THE TIME.
HG: I see. So how is the market in Zenith?
GB: I am working on a blog post on the topic.
HG: What will it say?
GB: Don’t know yet, but it will be on allZenithhomes.com, myzenithblog.com, Facebook, MySpace, friendfinder, ActiveRain, del.icio.us,stumble upon, Digg and the RSS feeds will be burning, old boy.
HG: Ok, you seem to be up on the latest social networking trends, tell me a bit about your social network?
GB: There’s some fine fellows in it. Its neither social nor a network but, by gee, you gotta be in it. It’s more like a water cooler.
HG: What’s that?
GB: That’s my other iPhone. Text message coming in. Like the sound?
HG: Yes, that’s a good one. So how is your brokerage holding up?
GB: I can’t believe it!
HG: Times are tough all over, I suppose.
GB: House that old boy?
HG: I said the market is bad in most parts of the country.
GB: I can’t believe it! Paul has stopped blogging on Omar Gribble’s blog!
HG: Oh.
GB: Bah, Gribble’s blog, Yapville USA, I always say. You know, a man needs to have the right connections, be on the right blogs.
HG: Yes.
GB: I want to see what Hanson says about this before I weigh in with my comments. I sense a whole blog post brewing on this one, by golly.
HG: About what?
GB: Are you kidding me? What’s this? Littlefields is building a private network for their agents instead of using Ning.
HG: Speaking of Littlefields, I heard they were doing well in Zenith even in this market. How’s the Babbit Thompson firm doing?
GB: What do you expect? Think we were sent into the world to have a soft time? A man who doesn’t buckle down and join the online conversation is lost. I am as transparent as the next guy.
HG: Sorry?
GB: You know old boy, transparent. They’re all talking about it.
HG: My name is Louis. How does it help your business, George?
GB: Now some of them, well, maybe they have a case of social flautuence, you know hot air artists, gas bags and the like.
HG: Who?
GB: The Foggers, these small town boobs with nobody but each other to talk to, no wonder they get so sloppy and uncultured in their speech and so balled up in their thinking. Two words for them: Expand your social networks.
HG: That’s four words. Are you selling any real estate in this market?
GB: Old boy, I am making connections, Are you on LinkedIn? I have over 500 connections. The LinkedIn people lost count at 500 on me, yes siree.
HG: Nearby Floral Heights is reporting an increase in foreclosures and REO’s – has that also impacted Zenith?
GB:I live in Floral Heights. Have you been?
HG: No but I wish to visit some day. George, you were quoted back in 2005 as saying “I make nothing in particular, neither butter, nor shoes nor poetry but am nimble at selling houses for more than people can afford to pay”. With tightening credit standards, do you still have that knack?
GB: Listen old boy, I’ve got a roundtable to participate in that’s going to be podcast at two, gotta hop.
HG: Bye.

Just the sort of counter-cultural message that may save a few careers.

Many agents believe that being active will translate to revenue. Activity does not necessarily equate to productivity. I hope we can look forward to more on this subject when you speak at Inman Connect, Louis. That’s all I have time for now. I have to update my photo on FacedIn before the conference.

Social networking and media experiences are addictive. Although I definitely see the value and have reaped rewards (real money not just “fame & glory”) it is critical that an agent not put all their time and energy into these endeavors, but budget their time between many prospecting activities to thrive. That said, the above is too darn funny.

George seems to have completely got into social networking. Looks like the socio bug has got him too in its web. I’m also active in lot of social network sites and I just love them.

It was nice reading the interview.

Was that a real interview? LOL It was hilarious. As Michelle points out budgeting of our time between effective productivity and socialization is a problem for some real estate agents.

That was great. Is the babbit book very good. I have never heard of it before.

Kimbrough
The book Babbitt is a pretty good read. Its more important for its contribution to literature for characterizing a typical middle aged male who after spending his whole life believing in a certain middle class ethos starts to challenge his circumstance.
The book was written in the 1920′s and George Babbitt just happened to be a Realtor.