Itâ€™s a popular line when giving directions. â€śYou go to the end of the block and turn left.â€ť And itâ€™s hard to go wrong. After all, the end isâ€¦the end. When you get there you know what to do. Because itâ€™s the end.

Except when they move the ends.

Itâ€™s like the proverbial â€śpot-o-goldâ€ť at the end of the rainbow. If youâ€™ve ever triedÂ 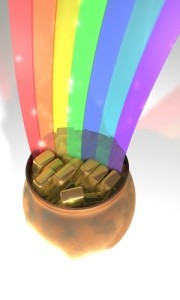 toÂ find it (and I did as a kid!), then you discover a very disturbing fact. The end of the rainbow keeps moving. The closer you get, the more it moves away. Itâ€™s kind of like the current real estate market.

Someone keeps moving the ends.

I just read an interesting post entitled â€śHow do you get back to the basics when the basics have changed?â€ť Great question! And I can totally relate. In our office meeting just yesterday we got into a lively discussion between the techies and the tech-nots. The argument was based around the idea that technology is critical to the markets of the future. The techies were advocating websites, email blitzes, SEO, Facebook, Twitter, internet leads and so on. The tech-nots were out there pounding on doors, holding open houses, networking at local events and advocating face-to-face contact. I sat in the back corner and listened with interest â€“ both sides were advocating their side at the exclusion of the other. Guess what?

Let me get this straight before you think Iâ€™ve lost my mind or that you donâ€™t know me after all. Iâ€™ve NEVER pounded on a door – except when I sold encyclopedias as a teen. And that VERY negative experience imprinted a permanent lesson onto my brain: I am not designed for cold calling, door knocking type sales. Iâ€™m one of those techno-geek types that is most at home in front of a monitor pounding away at the keys.

However, when we get to the end of the day, you wonâ€™t get many transactions without personal interaction and face-to-face, skin-to-skin contact. We need ALL the pieces to succeed in the current market. And that brings up my basic problem: the pieces keep changing. Sure we know the basics: farming, door knocking, working the phones, open houses, writing notes, etc. However, there is a whole new group out there that will either never open their front door or actually live behind security gates. They will take about five seconds to dump your direct mailers in the trash can along with all the pizza and carpet cleaning coupons. They wonâ€™t visit your open house because they just saw the virtual open house online. They are too busy to join Lions, the Rotary and other such organizations. So they relate on Facebook instead and tweet themselves silly. They donâ€™t have kids yet so networking at Little League is out. And those who DO have kids donâ€™t watch them go outside to play with neighborhood children; they observe them go online and play with kidsâ€¦in Japan.

So how do you get face-to-face with these types?

Online. And in reality, you donâ€™t find them. They find you. If, that is, youâ€™ve made yourself â€śfindable.â€ťÂ  Thatâ€™s just one great example of â€śmoving the ends.â€ť And, once they do find you, mere seconds is all you have to engage them. If they like what they see or read, then you may actually get a chance for a face-to-face. BUTâ€¦chances are they are meeting face-to-face with others as well, so thatâ€™s when your relational skills will need to shine. And thatâ€™s where another â€śmoving of the endsâ€ť occurs â€“ they donâ€™t want to meet with a salesperson. Start selling and they will start counting the minutes until you leave. They want to talk to a coach. An advocate. A mentor. A consummate real estate professional. Someone who knows more about real estate and the market than they do and who will be able to effectively guide them through the mazes and mine fields. And you can count on one thing â€“ in this internet age, most consumers know A LOT about real estate. More than some REALTORSÂ® I know, in fact.

And, like it or not, the ends will keep moving. Our society is moving faster and faster. Ever evolving and re-inventing itself. Cultural barriers are coming down at warp speed. The speed of business is increasing and only those who understand that the ends are moving will actually succeed long term. Because you not only need to know that the ends ARE moving, you need to know how to determine where they have moved TO.

They need to start moving in your business as well.

7 Comments on “Who Moved The Ends?”

I think that you really hit the nail on the head when you said people on social media do not want sales people, in fact nothing will switch them off quicker. I have been focused on social media for the past 6 months and I realised pretty quickly that it is all about credability and adding value. You maybe promoting yourself or a product, it doesn’t really matter, you need to add value to whatever community your participating in. Also, I do not think it has to be a techie or non techie thing, when you get the people to your product, you can lead people through the process using the same techniques that you would on the phone or in person. You establish a relationship with them. For people like me who are better at the relationship building side of it, rather than the technical, there is hope! There are a lot of articles, videos and reports out there that can give you some direction (there are also a lot of duds)…my rule of thumb is, if someone is a genuine expert (i.e. they have made lots of money doing it themselves) then take notes. If they have no authority, be a bit more careful. Anyway, here is an article for non-techies about how to set up your site to get the most leads, to start the relationship and so on! http://hubpages.com/hub/Greg-Clements-Squeeze-Pages-Rule

Totally agree – thanks for the comment. And the link!

Carl,
Well said my friend. If I could expand on your comments on what others are looking for… You mentioned a coach, mentor or advocate. None of these are possible without hard work and the knowledge gathering it takes to put you in the position to train, grow or represent. Everything else is a plus and surely needed, whether it be techno-knowledge, working farms, etc., but without staying current in the industry, all would be for naught. You do this very well and it is at least partially responsible for you being “found”. John

Good advice, Carl. RE is changing, today’s savvy consumers are looking for experts who can guide them, not salesmen with a smooth sales pitch. A combination of both (online/offline) will increasingly become a differentiate those who are successful and those are not.

Debating with non-techies about whether internet marketing is important is like talking to a wall. Some people just don’t get it. Any Realtor with a great online presence and a splash of personality to follow up on the leads will dominate their market. The non-techies can door knock their hearts out.