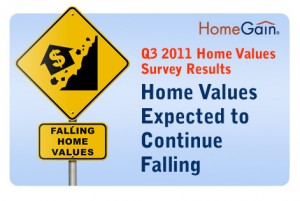 Most real estate professionals and homeowners continue to expect home values to decrease or stay the same through the middle of the year. Forty-seven percent of agents and brokers and 45 percent of homeowners think that home values will decrease over the next six months.

In the second quarter 2011 HomeGain National Home Values Survey, fifty percent of agents and brokers and 30 percent of homeowners thought that home values would decrease over the next six months.

Forty-two percent of real estate agents and brokers and 43 percent of homeowners think that home values will remain the same in the coming six months. 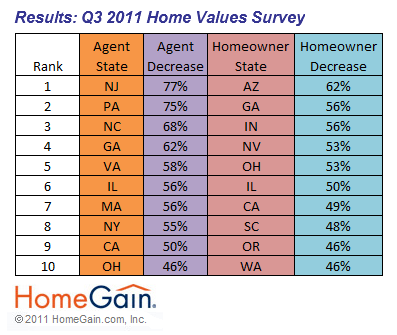 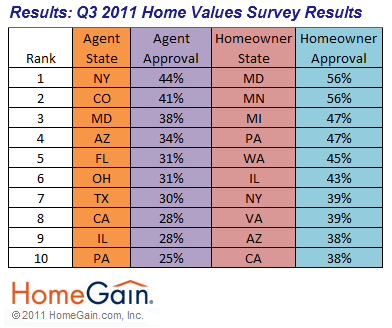 The third quarter 2011 regional results are available by clicking here. “The Baltimore Washington corridor continues to be somewhat buffered from the economic slowdown and values overall have stayed consistent over the last 2 years.”

“There is a shortage of listings in the Orlando area, less than five months inventory. Average sales price has increased over $20,000 from January to July.”

“Prices are HOLDING UP in this Particular Area….a few miles away and the story is totally different.”

“My home has decreased to 1/3 of what I owe on it. I should just walk away…. This sucks.” – Homeowner feedback

“If home values have decreased, why haven’t the property taxes decreased as well?” – Homeowner feedback

“The economy has remained relatively strong in Texas and in the greater Houston area in particular, which is why I don’t think our home has declined in value in the past year.” – Homeowner feedback 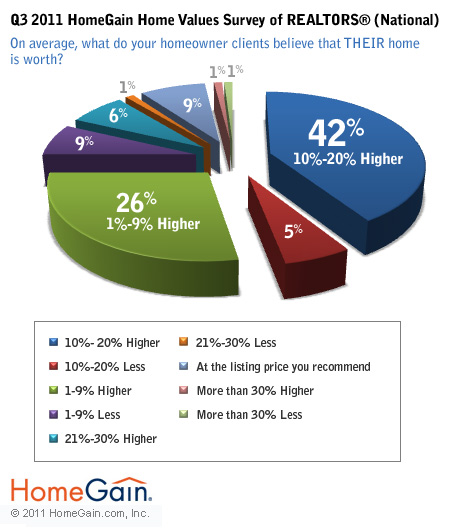 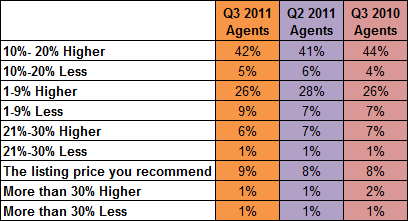 Overall, 75% of home sellers believe their homes are worth more than their agents’ recommended selling price.

Commentary From Question 2 — On average, what do your homeowner clients believe that their home is worth?

“I feel my home value will stay the same due to the improvements I have made. Unfortunately these should have increased the value.” – Homeowner feedback 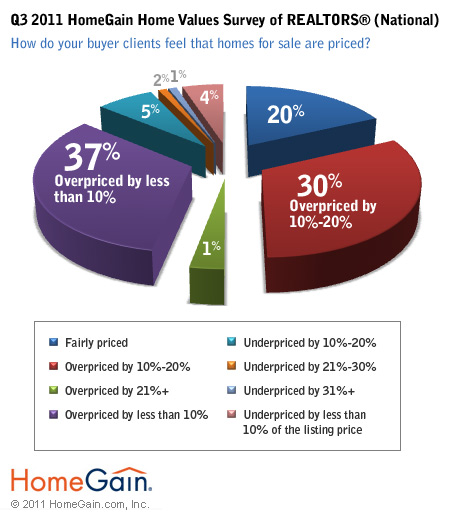 Overall, 68% of surveyed agents and brokers indicated that their home buyer clients think homes for sale are overpriced.

See regional results
Commentary From Question 3 — How do buyers feel that homes for sale are priced?

“The days of low ball offers are gone. Buyers who understand the market has changed in the last 18 months are more likely to make offers Sellers will accept. Buyers who low ball, especially short sales and REO, will lose.” 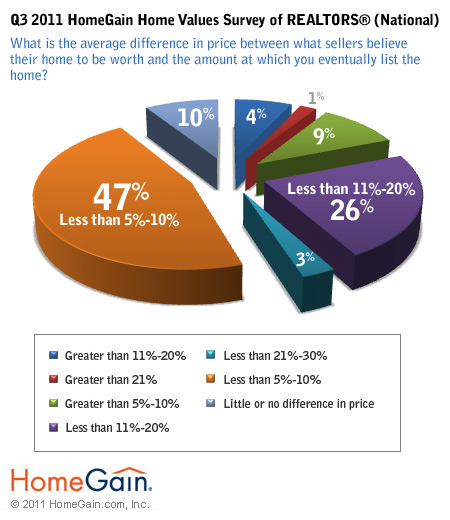 Commentary From Question 4 — What is the average difference in price between what sellers believe their home to be worth and the amount at which you eventually list the home?

“In general, home sellers are becoming more realistic about initial pricing. Available data literally overwhelms most of their unrealistic ideas.” Overall, nationwide, agents indicate that 93% of homes sell for less than the price they are listed at.

“Based on April market activity, many REO properties have been receiving multiple offers and sale prices above the list price. I believe this is the first sign of the recovery we have been waiting for.” Overall, the majority of agents and brokers think home prices will decrease in the next six months.

“The economy should NOT be an excuse not to buy now. Prices have already bottomed and will rise with interest rates in the future.”

“Foreclosures are driving the market and their pending release could substantially change values.”

“Home values in our area are still falling, but sales of homes are getting better so I’m hoping we are close to stabilization of home values.” – Homeowner feedback

“I live in an area where housing assessments by the City of Milwaukee has been lowered. The Irony is the area in which I live the population is increasing. There are a small number of New housing starts. Homeowners are upside down in mortgages and homeowners values have been reduced significantly due to foreclosures. 2009 I refinanced my home for a lower interest rate. Home value was 80,000 today and the projected value is $40,000.00 and dropping.” – Homeowner feedback

“The time to buy is usually when popular opinion is negative, so I expect values to be going up.” – Homeowner feedback

“Home prices are going up, now is the time to buy before they return to the past prices.” – Homeowner feedback

“The only way that home values will increase is when people have employment and feel that their jobs are secure. I am still waiting for President Obama to start the rail system that he was so eager to bring into our country. That would certainly create jobs, solve our overcrowded highways, give people a wonderful way to travel. I see it as a win, win for everyone.” – Homeowner feedback Agent Commentary From Question 7 — What percent of homes for sale in your area are foreclosures?

“The Nashville/Middle Tennessee market is flooded with Short Sales in all price ranges. There are far more Short Sales than Foreclosures. Give me some balance!” 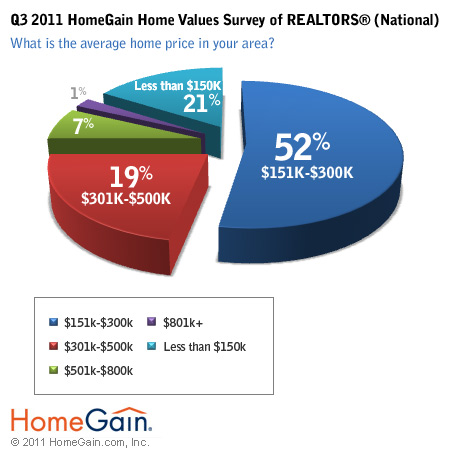 Agent Commentary From Question 9 — In the past three months, what percentage of your clients were first-time buyers? Commentary From Question 10 — How do you think Barack Obama is performing in his role as President?

“The current administration is the most anti-business, anti-housing, anti-consumer ever in our history. If their policies are not stopped, the housing market will be even more decimated than it has been.”

“The President & the Dems in congress have put this country in a whirlwind of financial strain that we will be lucky to get out of. They shot down the balance budget amendment like that is a bad thing, everyone in America has to balance their budget.”

“The President got handed a horrible war, debt ridden economy from President Bush, as well as a horrible international image. Congress was not tough enough with its banking regulations and should re-enact Glass-Stegal.”

“Cannot make decision yet on candidates. Obama took on hard economy situation, think he is making some tough love decisions, need time to work. Not everyone will be happy. Some will jump on band wagon with negative news rather than look at overall picture.”

“I think that the President has been stymied by Congress, and hasn’t been able to run the country the way he believes it should be. I do believe that given one more chance, he could put this country back on the road to recovery!” – Homeowner feedback

“I had such high hopes for President Obama, but he has not made much progress with our economy. Granted, it was a huge job to begin with and we all had unnatural expectations. Instead, however, concentrating his time on his horribly screwed up healthcare plan, which only plays right into the insurance company’s hands, he should have concentrated on jobs, jobs, jobs.” – Homeowner feedback

“Obama inherited a legacy of serious fiscal problems caused by the prior administration – the unnecessary invasion of Iraq has cost astronomical sums of money and lives and bore no factual relation to the 9/11 attacks. The deregulation of the financial markets was another sad inheritance.” – Homeowner feedback

“This President made a lot of promises to get us going in the right direction and offered us “Hope”. He hasn’t kept many of those promises. The one he should keep is that if he didn’t fix the economy within 3 years, he was ” a one and done president”. I hope that’s the promise he keeps.” – Homeowner feedback

“Congress needs to work with the President to make this country stronger. The U.S. needs to invest heavily in renewable energy sources and relinquish our dependance on fossil fuels. The Texans need to forget about fossil fuels, it erodes our environment. Our dependance on foreign oil is killing this country’s growth and promotes conflicts that lead our young men and women to fight on foreign soil.” – Homeowner feedback

“It’s not Obama for the most part. It’s the left and the right that won’t come center. It’s the right who’s sole purpose for these 4 years is to do whatever it takes to get him out. The people be damned.” – Homeowner feedback

“Our nation’s current state has taken time to reach this point. President Obama has received much criticism for his poor performance and inability to turn this around quickly, which is unreasonable and unfair. Opposition would be happy to have public believe our nation’s current state is the fault of our president and his administration. OhMyGoodness! Calgon! TAKE ME AWAY.” – Homeowner feedback 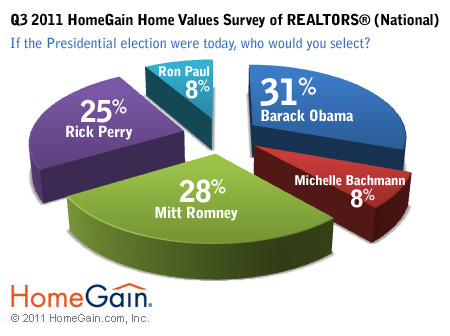 Agent Commentary From Question 11 — If the Presidential election were held today, who would you vote for?

“I would rather have Hillary at the helm.”

“Doesn’t matter who’s in office. Nothing will change, politicians are interested only in their own self-interest, not the people they are supposed to be helping. If the election were held today, I would write in a vote for Ronald Reagen.”

“I don’t think any of the candidates are viable.”

“I’m not sure I would vote for any of them.”

“I think Michelle Bachmann is a whacko & Rick Perry is a pandering right wing suck up.”

“We would vote for ANYONE except Obama….ANYONE.”

“After Bush(s) messed it up, why didn’t these others step up then? And Perry after the Teachers, he can forget it!” – Homeowner feedback

“I do not think any one mentioned in your survey is fit to be President. I am very disappointed with US Politics. None of them has any real interest in Us citizens just themselves. They are in office to make money and the hell with us!” – Homeowner feedback

“I am very disappointed in the economic condition of this country. Our elected leaders have really dropped the ball (for the majority of the people), and I am totally disenchanted with all of it.” – Homeowner feedback

“I don’t like any of the GOP candidates so even though I’m not crazy about Obama, he’s the best of the lot.” – Homeowner feedback

“I’m not crazy about Obama, but I don’t want another Republican in office. Our country can’t take it.” – Homeowner feedback

“I would only vote for Obama because all of the other candidates seem to be more concerned with keeping the wealthy more wealthy than in correcting the country’s financial disaster.” – Homeowner feedback

“Rick Perry has done great in Texas as Governor. He will do the same for the country as President.” – Homeowner feedback

“If the Republicans weren’t so dead set against anything that doesn’t fit into their rich supporters plans we could move forward. They went along with anything Bush wanted and have fought everything Obama wants. Shame on them all.” – Homeowner feedback

“Anyone but Barack Obama will be fine by me.” – Homeowner feedback

This is a great post; lots of information. Let’s hope it is semi-correct so that the market begins to turn.

Interesting data; what exactly are homeowners and real estate agents basing their claims on?

I think the most interesting part of your survey was the section on politics. It sounds like almost everyone polled is completely disgusted with politicians in general. Can’t say that I blame them.

I’m on the same boat as Dan, where is this information coming from?

Thanks for posting this valuable information. I am a Realtor in Lexington, Ky and we are seeing a slight decrease in regards to price.

With South Ogden real estate, you need help from a professional you can trust.

House for sale in cebu

Hi there. I really enjoyed reading this article thanks for helping! Thanks, keep posting.