Thirty-eight percent of real estate professionals and 49 percent of homeowners believe home values will stay the same in the next six months. 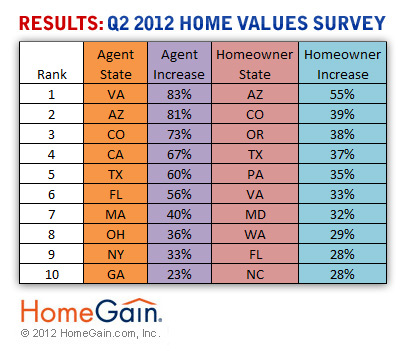 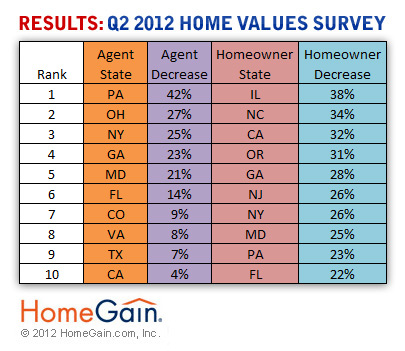 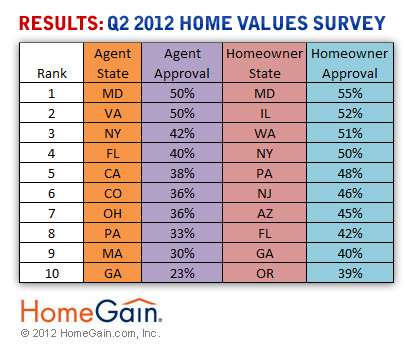 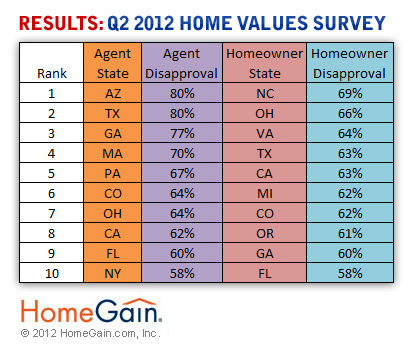 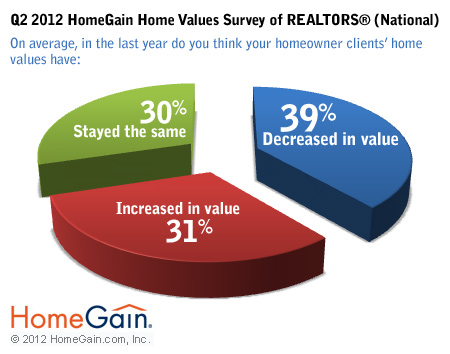 “The market on Maryland’s Eastern Shore is better than the past couple of years. However the values are still declining slightly.”

“Housing market in our area is very good. Values are going up at a slow to medium rate.” – Homeowner feedback

“Home values are down in my area, almost to what I purchased in 1995. Several foreclosures going less than $100,000.” – Homeowner feedback

“Housing values are down, but have slightly rebounded.” – Homeowner feedback

Home value has stayed the same because of improvements (investments) made.” – Homeowner feedback

Our home’s value decreased in such a large magnitude, it’s impossible to do anything with it without losing more money.” – Homeowner feedback 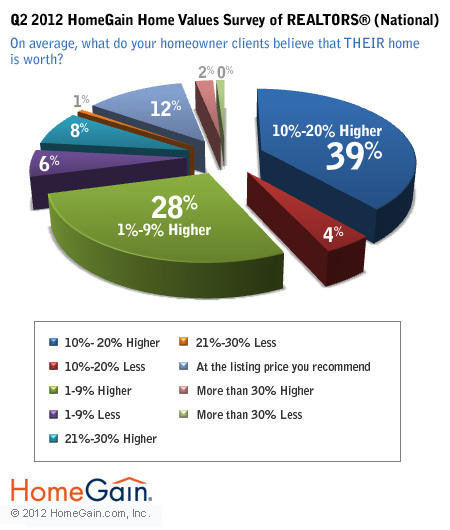 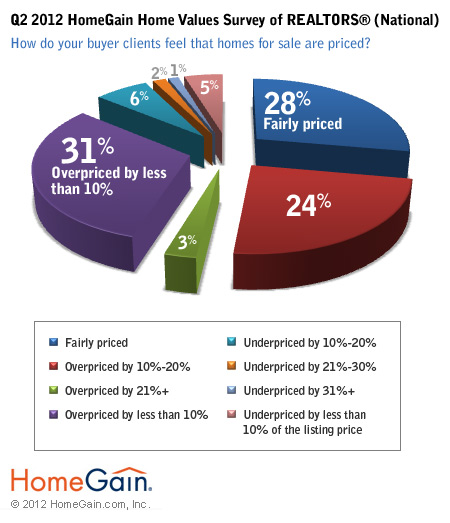 Overall, 58% of surveyed agents and brokers indicated that their home buyer clients think homes for sale are overpriced. Overall, nationwide, agents indicate that 88% of homes sell for less than the price they are listed at.

“Just sold my house for 169k. That’s the same as two houses near me, but I just spent 10k renovating the basement bath/family room and updated everything else in the house. At best I broke even on my 10k renovation.” – Homeowner feedback Overall, the majority of agents and brokers think home prices will increase in the next six months.

“Our market is being affected by national builders who build a cheaper product which is beginning to devalue homes in our market.”

“I believe we are at or near the bottom of real estate prices. I have begun investing (again) in single family homes for rental in several markets.” – Homeowner feedback

“Home values may stay the same but the real value based on the gobal economy will decline as the value of the dollar declines.” – Homeowner feedback

“The reason I expect my home value to increase is because of the ND oil boom. It has NOTHING to do with the economy of the country that I consider to be going downhill.” – Homeowner feedback

“Home prices will continue to decline, and when the next round of QE hits, the dollar will also further decline. This pattern will continue until the dollar collapses. At that time, regarding homes, most of America either will be sold to foreigners at prices that look outlandishly cheap to them, or Americans will be able to pay off their homes because their salaries will be more than they borrowed to buy the house.” – Homeowner feedback

“New homes/condos being built all the time here. Prices haven’t quite climbed back to 2008, but they’re headed in the right direction.” – Homeowner feedback

Home values may stay the same but the real value based on the gobal economy will decline as the value of the dollar declines.” – Homeowner feedback 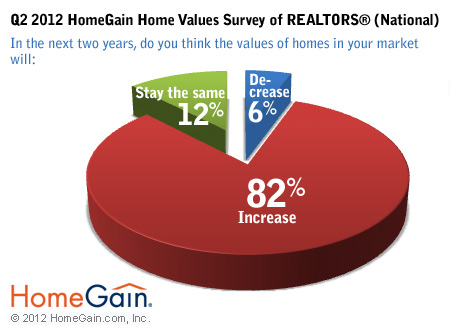 Overall, the majority of agents and brokers think home prices will increase in the next two years. 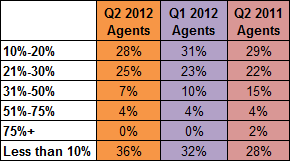 Overall, 68% of surveyed real estate agents and brokers and 59% of homeowners disapprove of President Obama’s performance.

Commentary From Question 11 — How do you think Barack Obama is performing in his role as President?

“President Obama has fought against all odds and evilness to do what is right for all of America’s citizens. Never has there been such a mood of hatred against an American President as we are experiencing Now!”

“Obama has done a lot for Healthcare as well as getting us out of the Middle East. I have a son in the service and appreciate this greatly. We are not the world’s police. Stop sacrificing American Soldiers for someone else’s fight.” – Homeowner feedback

“I believe President Obama is the one who will get this economy back on track. We soon forget how four years ago the republican administration bankrupt this country through a needless war in Iraq, and unregulated Wall Street. This President is not God but is the best alternative.” – Homeowner feedback

“If I thought Ron Paul would have a chance, I would vote for him because, (even tho I personally do not use Marajuana, I feel it should be legalized, & I think he would push for it) but since I don’t think he has a chance in Hell, Obama is my choice. I would NEVER vote for Romney – or any of the Republicans that have been running lately. Every time one gets in office – they put us so far in the red, it takes years to straighten out the mess! I’ll give Obama 4 more years to finish what he’s been trying to do – and has been held up by the Republican senate & congress. If he wins, and we get a Democratic majority in the fall, I think we’ll see big changes- for the better, of course!” – Homeowner feedback

“The President & Congress, need to get it together and ease the worries of the working class.” – Homeowner feedback

“This program has really helped us save our home but a lot of what he’s tried to do is always blocked by the Republicans even when it used to be their policies. Just because Obama’s name is on it, they will reject it. He will win a second term.” – Homeowner feedback

“I am sure there is a strong correlation between people who believe the value of their home has and will increase with those who believe that Obama has done a good job so far as president.” – Homeowner feedback

I think Obama needs to be impeached!! This has been done in the past to a president who did no where near what this idiot has done to this country!” – Homeowner feedback Agent Commentary From Question 12 — If the Presidential election were held today, who would you vote for?

“With the negative economy, I believe the market will recover more quickly if there is a change in the Administration at the Federal Government level, giving people more hope.”

“A change to Mitt Romney can give us a major stimulus since nearly 1/2 of our clients are terrified by the current president and the excess spending and corruption that is attached to it.”

“Tough to choose either one, but I’d prefer Donald Trump to solve issues of the country.”

“I really don’t like any of the candidates and think it’s a shame what our politics have become.”

“I would cast a vote for Newt Gingrich for President.”

“I think they are all lying, cheating crooks robbing America for there own gain. They couldn’t relate to what the truth is or us tell the truth if there pathetic lives or there families lives depended on it .” – Homeowner feedback

“I strongly approve of Obama because the Tea Party Republicans scare the #### out of me and I’ve been a Republican for over 40 years and have run for elective office as a Republican.” – Homeowner feedback

“President Obama has the skill and leadership to prayerfully guide our country in the best direction. Romney and all of his super rich comrades only have greed for their own personal wealth, not what is good for the USA. ” – Homeowner feedback

“Unless our citizens start demanding their freedom back, it really doesn’t matter who wins the presidential bid. The constitution has already been trampled and the government has become primarily a wealth redistribution engine. Frankly, I think it is too late as the number of people drawing benefits from the government are sufficiently numerous to change course until the issue is forced by economic depression and government bankruptcy.” – Homeowner feedback

“The lesser of three evils . There is really no one to vote for . Don’t like any of them.” – Homeowner feedback

“Nobody OR no president is capable of fixing the problems in the US. It’s out of control and so are all the politicians and representatives. It’s a shame.” – Homeowner feedback Agent Commentary From Question 13 — If the Presidential election were held today, who would you vote for?

“I refuse to vote for either one of the candidates.”

“Both candidates are a poor choice and looks like we are headed to communism.” – Homeowner feedback

Good article, I don not know for sure who will help the market more in the next election. But the real estate market has been climbing with the president we have now….

Thank you for the very insightful information of the current situation of the property market in the states. Also here in Europe we have been experiencing a very similar situation. We can only speak about the situation in Cyprus, were the prices have gone down, the market is relatively steady, although the development is going down and people are more interested in buying resales.

This is great info, here in Phoenix we have seen about an 20%-28% increase in values during the first half of 2012. Much if this is due to the drastic inventory shortage, none the less these values will be the sales comps for the next 6 months; thus fueling the recovery.