Forty-one percent of real estate professionals and 46 percent of homeowners believe home values will stay the same in the next six months.

“Real estate professionals have grown more optimistic regarding the direction of home prices, especially in the states that have been hardest hit in the past few years, like Arizona, Nevada and Florida and also in states that have done comparatively well, like Massachusetts and Virginia.” said Louis Cammarosano, General Manager of HomeGain. 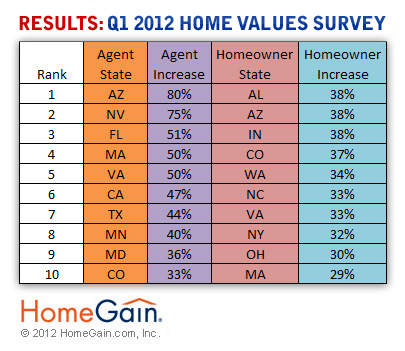 “Many of the people in the media keep talking about how bad it is in Metro Detroit and they haven’t got a clue what is going on in our area. Homes are selling and in many micro-markets back to 2005 numbers.”

“The Silicon Valley is a hot seller’s market with many areas & price points seeing multiple offers and overbids. In some cases offers are presented without even the usual contingencies for loan and inspection.”

“I don’t believe the value of homes in my area have increased due to anything the President has done. Honestly, after the recession low, the only direction prices could head is UP.” – Homeowner feedback

“After only 4 years of ownership, my home is seriously underwater.” – Homeowner feedback

“I also have an inherited house in Boston, MA and it’s worth has continued to decline.” – Homeowner feedback 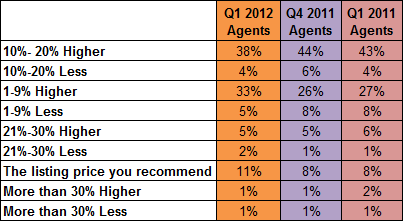 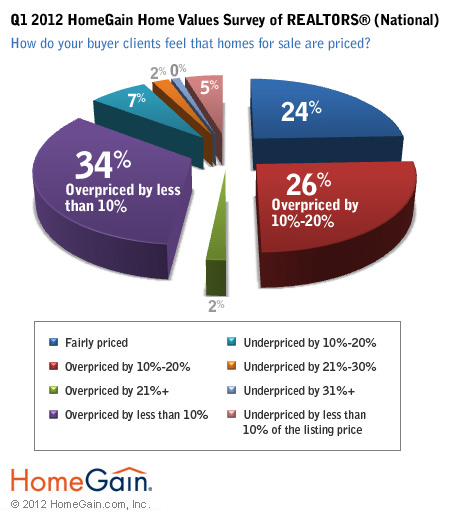 Overall, 62% of surveyed agents and brokers indicated that their home buyer clients think homes for sale are overpriced. 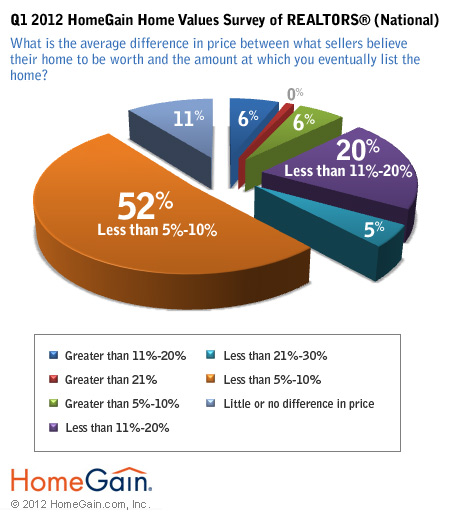 Commentary From Question 4 — What is the average difference in price between what sellers believe their home to be worth and the amount at which you eventually list the home?

“The economy is recovering but we still have a long way to go. Real Estate can help that process move along if the sellers and banks would accept the values of properties as they are presently.” 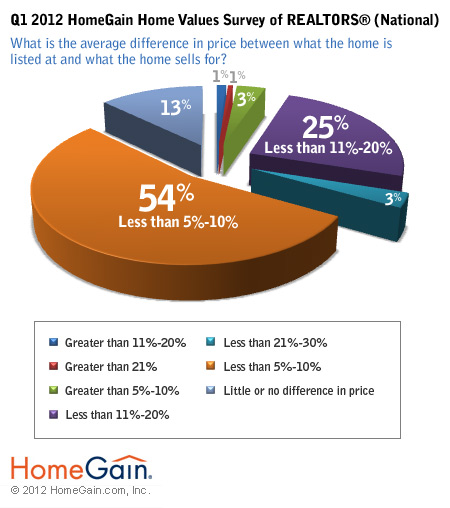 Overall, nationwide, agents indicate that 82% of homes sell for less than the price they are listed at.

“LV is currently sitting with less than 7K SFR in inventory. This is causing almost every home
priced correctly to receive anywhere between 4-6 offers on average in less than 48 hrs.”

“Nice clean single family homes located in decent neighborhoods are now getting multiple offers up to $500,000.”

“All properties under 500K that are standard sale are going over asking!” Overall, the majority of agents and brokers think home prices will stay the same in the next six months.

“Our market is being affected by national builders who build a cheaper product which is beginning to devalue homes in our market.”

“Market has definitely stabilized and should show further signs of improvement over the next six months if the lending environment improves.”

“With about 90 days inventory we are seeing a firming of prices in entry level homes. A positive for our market.”

” I’d have to say the market sucked, sucks, and will continue to suck for the next 20 years.” – Homeowner feedback

“I think we’ll see home values remain the same until 2014 and then we’ll see values begin to rise.” – Homeowner feedback

“I read in the Ark Dem/Gaz a couple days ago that home values were edging up. I will wait and see before I buy into that prediction.” – Homeowner feedback 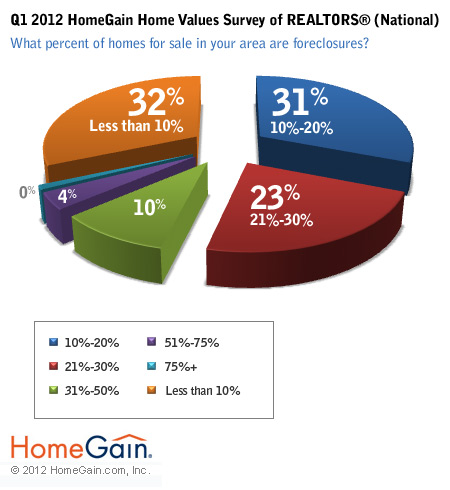 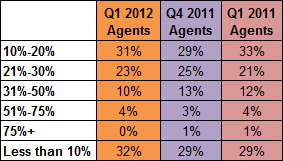 Commentary From Question 7 — What percent of homes for sale in your area are foreclosures?

“The glut of foreclosures on the market has stalled the home industry which helps drive the economy. Many of us would now be moving up the real estate ladder or buying retirement homes if we weren’t saddled with an albatross in our current home. I for one would love to sell my house and buy a retirement home but in the current market this just isn’t feasible.” – Homeowner feedback 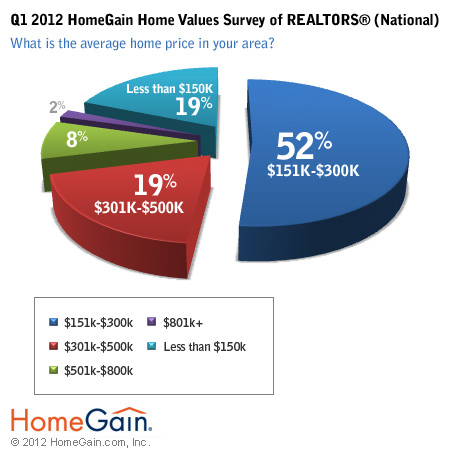 Overall, 66% of surveyed real estate agents and brokers and 56% of homeowners disapprove of President Obama’s performance.

Commentary From Question 10 — How do you think Barack Obama is performing in his role as President?

“I believe that history will show Obama as one if the worst in history.”

“Obama is the worst president this country has seen in a hundred years and makes Carter look great. Oh and I am a registered Democrat.”

“Republicans are crooks representing wealthy interests. They really don’t care about the average homeowner. Please don’t say good things about the Republicans. Our housing mess is more their fault than the Democrats, and it’s definitely NOT Obama’s fault.”

“President Obama’s policies are hurting this country. Jobs is the #1 issue. If people have jobs then people would begin buying homes again. If you want to see a boost in the economy, elect a different administration.”

“My reasons for not wanting Obama to remain the president have nothing to do with the economy, and everything to do with his tendency to run roughshod over the rights guaranteed by the Constitution.” – Homeowner feedback

“As retired vet. home owner and taxpayer, I think Obama sucks! He is the worst Pres. we have ever had!” – Homeowner feedback

“What does Pres. Obama have to do with housing prices? The lenders made a mess of this in the Bush administration, leaving us to deal with it now.” – Homeowner feedback

“Barack was handed a big mess. He is doing a great job and should have 4 more years.” – Homeowner feedback

“Obama didn’t start this housing mess. Bush did. And how can Obama straighten out this mess in four years when it took Bush eight years to do?” – Homeowner feedback

“Give the man a chance. He is coming in to try to change something that has been deteriorating for over 8 years.” – Homeowner feedback Agent Commentary From Question 11 — If the Presidential election were held today, who would you vote for?

“With the negative economy, I believe the market will recover more quickly if there is a change in the Administration at the Federal Government level, giving people more hope.”

“I believe that Newt Gingrich is the most intelligent of the five, but is lacking the demeanor and diplomacy for the office.”

“I’ll support whoever the Republican candidate is. Hopefully it’ll be whoever has the best chance of beating Obama.”

“Anyone but Obama, even Ron Paul.”

“I would cast a vote for Newt Gingrich for President.”

“I am not overly impressed with any of the presidential candidates, but will be voting Republican when the time comes.”

“The ‘Tea Party’ and the neo-cons of the Republican Party are the biggest danger to our economy and our country as a whole.”

“A Republican slate is not final & we don’t know if Joe Biden is going to remain on the Obama ticket. The President is waiting.”

“Obama is a voice of sanity amongst candidates seemingly fixated on hysterical, untrue claims and a rush to the gutter.” – Homeowner feedback

“Not really anyone to vote for in that list.” – Homeowner feedback

“Very sad that a country as ours allowed these conditions to get to the level that they are. There will never be a solution as long as spending and parties cant agree to make us the strongest nation that it once was.” – Homeowner feedback

“There are no other viable presidential alternatives. It seems that at the very least Obama is trying. The other wannabees are completely out of touch with the majority of the American people.” – Homeowner feedback

“Stop the conservatives (Republicans) cold. Take back America. The United States will be set back 60 years if the rich, selfish, racist Republicans win.” – Homeowner feedback

“I think they all stink I just vote for the least smelly.” – Homeowner feedback

“I am a life long Republican but disappointed in their behavior. They have literally run the car into the ditch trying to oust Obama at all costs. Unfortunately that cost affects people like me that are not rich. We need big business to start hiring, we need Republicans to become a part of the answer, not a cause of the problems. If they had worked even to a small degree with the current president we would be in a much better place.” – Homeowner feedback

“I really don’t approve of any of the current candidates. The election is like ‘Monopoly’ he who has most money wins.” – Homeowner feedback

“I have not seen any viable solutions to the housing problem from any of the Republican candidates, who appear to be out of touch with reality.” – Homeowner feedback

“I would not vote for any of the crazy Republicans that are currently running for office in November.” – Homeowner feedback

“I do like Rick Santorum and Ron Paul. Either would be acceptable to me. I cannot relate to, do not understand, and would never vote for Mitt Romney or New Gingrich. I cringe anytime I see or hear either of them. They seem disingenuous and elitist….completely out of touch.” – Homeowner feedback

“All of congress should be replaced.” – Homeowner feedback

“President Obama has not helped very many homeowners, but the GOP candidates are acting like this problem will go away if we just ignore it long enough. Morons!” – Homeowner feedback

“I have lived through many recessions and know recovery takes time especially after the worst recession since the great recession. I think however the Republicans have had a complete bout of insanity. I have never agreed with Republicans but after the last six months of their rhetoric…….they scare the hell out of me.” – Homeowner feedback

“Obama inherited the problems of the past. Romney is an opportunist. Newt is newt…..terrible statesman.” – Homeowner feedback

“Politicians and politics have made our Country a sorry place to live and work. We need common sense decisions and a system that can work together to resolve our problems.” – Homeowner feedback

“I think Washington as a whole is a dismal failure. No one cares about America, only their own hide and party. Our elected officials are an embarrassment.” – Homeowner feedback

It’s quite amazing to see how fast the real estate business regained after the big crash in 2008. The biggest reason might be the incredible low prices right now.