HomeGain, a leading website that connects REALTORS® with home buyers and sellers, today announced that one of its agent members has reached two million dollars in gross commissions with the HomeGain AgentEvaluator program, with another 18 members being inducted into new award clubs. The total number of award clubs members now exceeds 1,000. 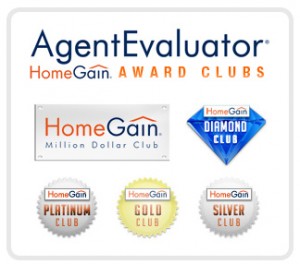 ross commissions. He is HomeGain’s first inductee in the Million Dollar Club and has been an AgentEvaluator Top Performer for the last five years.

“HomeGain continues to be an excellent source of leads for my business. The bottom line is HomeGain generates high quality, motivated leads. I highly recommend this company to any agent that wants to add additional lead generation sources,” said Eric Pakulla.

“We are extremely proud of Eric’s accomplishment and success with the AgentEvaluator program,” stated Louis Cammarosano, General Manager at HomeGain. “HomeGain is also proud that over 1,000 agents have earned admission to our award clubs by assisting home buyers and sellers with their real estate needs.”

Since the first quarter of 2011, HomeGain has inducted the following real estate club members:

HomeGain has two members in its Million Dollar Club (who have earned more than $1,000,000 in gross commissions).

HomeGain AgentEvaluator Award Club members have earned over $100 million dollars worth of real estate commissions since 1999 when HomeGain was founded. 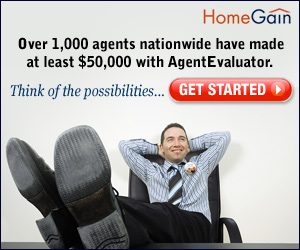 I had no idea they were so successful!

That’s great news. I’d like to be part of your success. Is there any requirements I need to pass?

Quality lead generation sources are tough to come by. I’d be curious to see how this program works.

that is amazing. As an agent just starting out in a challenging market this is very welcome news. Keep up the good work.

Quite inspiring! Congratulations Eric! Way to go HomeGain! With the state of things in the real estate market, partnering with HomeGain is really a plus!

Thanks for the kind words to Louis and Raul. Homegain is simply a wonderful company. Going on two more listing appointments tomorrow because of Homegain. Bottom line is it simply works.