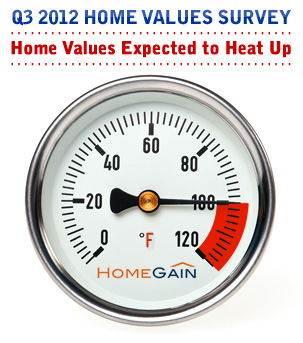 Thirty-eight percent of real estate professionals and 46 percent of homeowners believe home values will stay the same in the next six months. 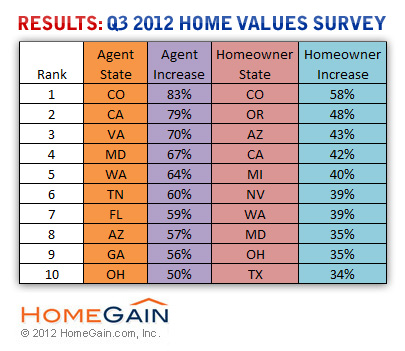 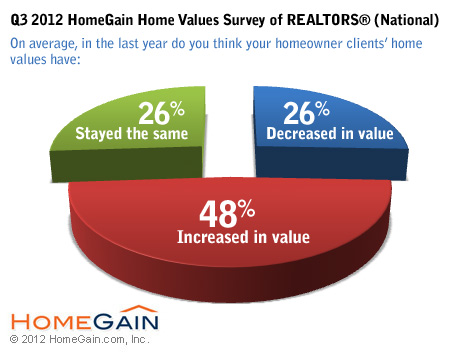 “Recently had my home appraised AND it was grossly under valued based on recent comps. The Appraisal process needs an overhaul. They swung from very high appraisals to under valued to ” be safe”. This is not fair to the home owner. Nobody wants to be caught giving too high a value and be questioned so they over compensate and give too low of one. ” – Homeowner feedback

“Housing market in our area is very good. Values are going up at a slow to medium rate.” – Homeowner feedback

“Housing values are down, but have slightly rebounded.” – Homeowner feedback

“Home value has stayed the same because of improvements (investments) made.” – Homeowner feedback

“Our home’s value decreased in such a large magnitude, it’s impossible to do anything with it without losing more money.” – Homeowner feedback 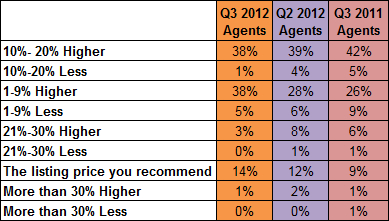 Overall, 60% of surveyed agents and brokers indicated that their home buyer clients think homes for sale are overpriced. Overall, nationwide, agents indicate that 77% of homes sell for less than the price they are listed at. 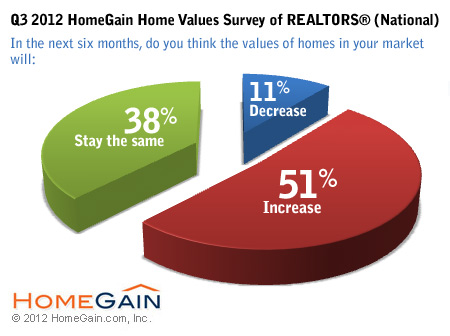 Overall, the majority of agents and brokers think home prices will increase in the next six months.

“With the lack of inventory, Buyers need to know when a home is fairly priced. If it is they need to come in strong, or someone else will. With still very low prices and still very low interest rates, you have little to lose by buying in this market.”

“The housing market looks like it is on the road to recovery-although there might be ups and down along the way.” – Agent feedback

“Home values may stay the same but the real value based on the global economy will decline as the value of the dollar declines.” – Homeowner feedback

“The only reason our value is up a little is because we remodeled the kitchen and other parts of this home, not because of neighboring values.” – Homeowner feedback

“New homes/condos being built all the time here. Prices haven’t quite climbed back to 2008, but they’re headed in the right direction.” – Homeowner feedback Overall, the majority of agents and brokers think home prices will increase in the next two years.

Commentary From Question 7 — In the next two years, will the values of homes in your market increase, decrease or stay the same?

“Values might slowly increase next 2 years but think it will be minimal.” – Homeowner feedback

“I believe the housing market will stabilize with home prices increasing over the next several years.” – Homeowner feedback 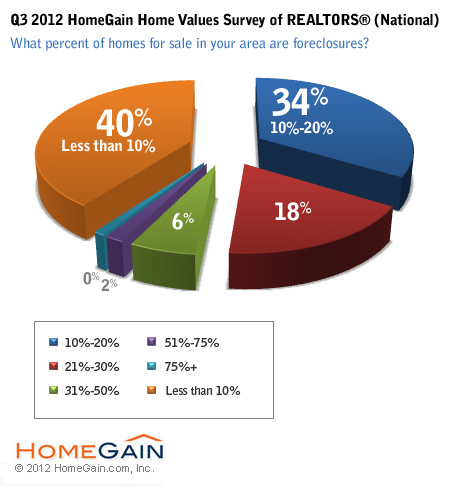 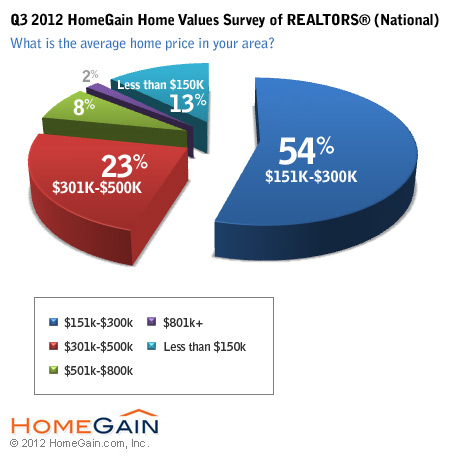 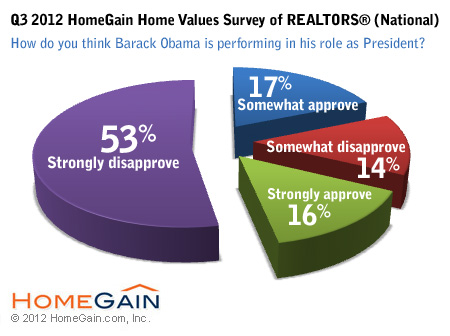 Overall, 67% of surveyed real estate agents and brokers and 56% of homeowners disapprove of President Obama’s performance.

Commentary From Question 11 — How do you think Barack Obama is performing in his role as President?

“I am nearing retirement. I feel that if Barack Obama is re-elected he would continue to fail with his economic policies and we will never be able to fully recover.”

“President Obama has fought against all odds and evilness to do what is right for all of America’s citizens. Never has there been such a mood of hatred against an American President as we are experiencing Now!”

“I have never seen a president failing so much in his policies and still have so much popularity, unless the media is not telling us the truth. I also believe that the media lost their role in reporting events and the truth.”

“I believe that President Obama is taking the nation in the right direction of recovery. It took time to get in this mess, and it will take time to recover from it, and he’s made good efforts.” – Homeowner feedback

“Obama has not kept any of his promises…why anyone would vote him back in is beyond me.”

“If Obama is reelected I want to go to another planet because he will destroy America and American values. This president is a disgrace to all Americans.”- Homeowner feedback

“I believe President Obama is the one who will get this economy back on track. We soon forget how four years ago the republican administration bankrupt this country through a needless war in Iraq, and unregulated Wall Street. This President is not God but is the best alternative.” – Homeowner feedback

“President Obama does not have a clue. I am tired of listening to his rhetoric.”- Homeowner feedback

“Our President needs the house to sign off on some of his policies, equal pay for women, education, and heath, etc. President Obama is doing a great job and he needs to be reelected to finish.” – Homeowner feedback

“This program has really helped us save our home but a lot of what he’s tried to do is always blocked by the Republicans even when it used to be their policies. Just because Obama’s name is on it, they will reject it. He will win a second term.” – Homeowner feedback

“I am sure there is a strong correlation between people who believe the value of their home has and will increase with those who believe that Obama has done a good job so far as president.” – Homeowner feedback

“Although Barack Obama is the president of the United States, there are so many policies that need congressional approval. He needs some compromise from both chambers–Democrats & Republicans. Its my ultimate hope that both Chambers and the President can find some common grounds to get things done for all of us.” – Homeowner feedback Agent Commentary From Question 12 — If the Presidential election were held today, who would you vote for?

“Time for Obama to go. He’s done NOTHING for the economy!”- Homeowner feedback

“Still undecided who to vote. Obviously as a middle class/working person, I have yet to see a relief and see that my life is better than the previous president. The way I see it, only the poor and the rich have benefited and/or the preferred class.”

“A change to Mitt Romney can give us a major stimulus since nearly 1/2 of our clients are terrified by the current president and the excess spending and corruption that is attached to it.”

“Obama is my favorite US President of all time. He is truly in touch with the American people.”

“I think Barack Obama has hurt the economy and will continue to do so, if reelected. He is leading us into unsustainable debt and the only solution he knows is to increase taxes on wealthier Americans.”

“Actually I might not vote for a President, since I am not high on either one of them.” – Homeowner feedback

“I refuse to vote for either one of the candidates.”

“Both candidates are a poor choice and looks like we are headed to communism.” – Homeowner feedback

“How can this president cleans up the mess left to him by others in 4 years when it took the others at least 8-12 years to create? Gimme a break, Obama is a man, not God!” – Homeowner feedback

“Not much of a choice. Neither candidate has shown any real interest in helping middle class families.” – Homeowner feedback 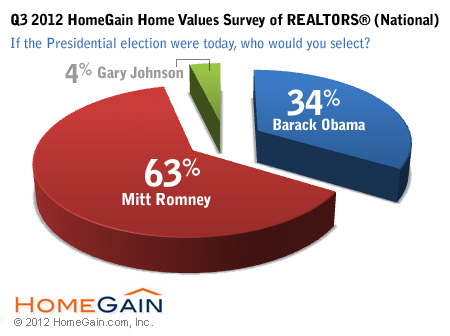 Agent Commentary From Question 13 — If the Presidential election were held today, who would you vote for?

“The lesser of three evils . There is really no one to vote for . Don’t like any of them.” – Homeowner feedback

“In the last three elections I have voted against the incumbant, career politicians are a scourge! Vote out the incumbent at every level every time. Then the government will be managed by the people for the people.”- Homeowner feedback

“We need a strong Third Party. Current political system is only concerned with gaining and controlling their own power.” – Homeowner feedback