Iâ€™ve been looking through some recent reports to try and sleuth out the general economic level of malaise and Iâ€™m am happy to say that we are not yet feeling the pain in a serious way. The San Francisco Apartment Association magazine prints a nicely detailed economic overview by Mat Sheridan. The first chart shows us that 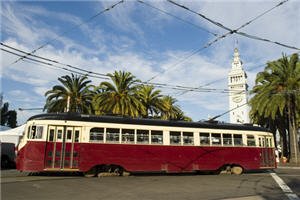 the San Francisco employment rate is less that the state unemployment rate by a little less than half. At 4 to 5%, our jobless rate is painful, but not devastating. Our vacancy rates are still less than 5% and we are among the top rental markets in the country.

I have this theory…..San Francisco is host to huge commuter busses that stop in most areas of the city. They pick up workers from Google, Apple, EBAY, Genentech and other south bay companies. The commuters are picked up in central locations throughout the city and driven to work and back. This has brought huge numbers of well paid employees whose only alternative to living and in San Francisco and working in the south bay was to endure a hour plus commute or take Caltrans.

The bus alternative is a no cost convenient way to live in San Francisco and work in Silicon Valley. The net of this, (my theory) is that San Francisco and Silicon Valley are becoming economically interdependent and this has fueled our rental boom. The health of the tech industry is even more closely aligned to the economic health of San Francisco than ever before. The human typography of this city has been undeniably altered.

San Jose as a Leading Indicator


San Jose is experiencing a very tough time. The San Jose unemployment rate is now 7.2%, compared to 4.9% a year ago and help wanted ads are down by 35%. If San Francisco has benefitted with a healthier economy Its hard to believe this isnâ€™t a leading indicator for softer rent rates. Remember… its well paying jobs that led the boom and it is jobs that will herald the decline.

San Francisco is not experiencing the home price declines that many homes have. However, if you consider that the major employers of the city are restaurants (hurting), the financial district (dead) and technology (weakening) then its time to adjust to new realities.

Markets precede peopleâ€™s perception of them. In other words, people are still trying for historic rent rates. Waiting is too expensive. Rather than continue to try for historic returns. Its time to lock in cash flow rather than hit a home run, to refocus on reasonable cash flow guaranteed for a least the length of the lease. Itâ€™s the best way to manage rental property today and to get safely through this downturn.

Â Click for more on San Francisco homes for sale.

One Response on “The State of San Francisco Rental Markets”

Yes, we are not doing nearly as poorly as some areas around the state. Given the inherent scarcity of land in San Francisco, real estate will always have a demand, As long as buyers have been holding back and waiting in the wings, these price drops should draw them out as long as they have stable jobs and financing.