Proverbs 20:14 – “Its no good, its no good!” says the buyer; then off he goes and boasts about his purchase.

The economy has been wreaking havoc on on rental owners as well as home owners. The great unwinding of the debt economy and the collapse of available credit has caused job loss, underemployment and a recession psychology causing consumers to pull back, not being sure if they are next to loss work.  Afraid of catching a falling knife, prospective buyers are waiting on  the sidelines.

The housing industry has been pinging property owners to try and get a sense of the degree of difficulty out there. I wanted to share with you some of what these surveys reveal. 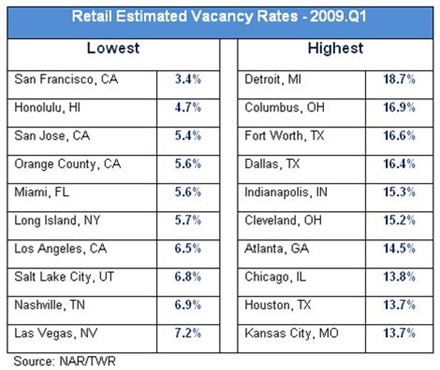 Rent.com
Rent.com surveyed more than 3200 apartment owners and found that 88% of property owners who participated said that job losses are contributing to vacancy rates. 50% said would-be tenants can’t afford rent or are trying to save, and 45% said that the trend of more people doubling up with roommates is causing units to sit vacant.  Rent.com general manager, Peggy Abkemeier, points out that many homeowners that would normally sell are finding themselves reluctant landlords, bring even more inventory to market

Reacting to soaring vacancies, 68% of landlords said they were lowering rents and 68% also said they were giving one or more months of rent free; 38% said they were reducing deposits; and 18% were offering upgrades or allowing more leniency for breaking leases or changing status, according to the Rent.com survey. Fifteen percent are offering storage or parking at reduced rates, and 8% are relaxing pet policies.

Move.com
Another survey, from Move Inc., which operates Realtor.com, found that 39% of people would sign a 12-month lease if it came with 2 months of free rent, and 18% would sign for free utilities for two months including water, electricity and gas. Fourteen percent said a free flat screen or LCD television would get them to commit to a lease for a year.

Afire.org
AFIRE is a non profit  of international investors. Their 2009 Mid-Year Survey indicates that international investors are turning their attention back to US real estate. 75% of those surveyed had not yet invested in 2009. However, 66%  planned to invest in US real estate before years end. Equity investors expect to place seven times more equity in the remainder of 2009. Debt investors expect to place three times more debt. 31% surveyed, said they were more optimistic than they were at the beginning of the year; 16% were more pessimistic; and 53% said they felt about the same. All in all, it looks like foreign investment money is revisiting and I hope it is further confirmation that we are building a base for an upturn.

Transunion.com
And yet another survey by TransUnion, which screens credit for property-management companies, found that half of property managers are having difficulty locating qualified renters, compared with last year. 81% are concerned they won’t find reliable tenants for the rest of 2009.

Looking Past the Problem

Income property, whether it be a duplex or a 20 unit building does makes sense in the long term, if you can ride it out. True, job loss has put a cap on rents and equity is declining for now. In fact vacancies climbed to 7.6% in the second quarter, and the apartment sector may not begin to see positive growth until late 2010 or 2011. But if you check the REIT commercial property index you will see its up better than 35%, because the commercial property difficulty we are in the midst of will end and there will be good investment opportunities. Buyers are waiting for the dust to settle and judging by the extraordinary price move of the index, its on the horizon.

Apartments as a leading indicator
I have heard more than once that apartments always lead the recovery out of recession. The latest was Hope Nadjii, Director of economic and market research for RREEF, a Deutsche Bank Asset Management Division. She points out that in the early 1990s total appreciation was down 32.3% and apartments were down 16.7%. (via Emily Landes for the SFAA magazine).

NAR
The reduction in commercial real estate activity is expected at least through the first quarter of 2010, said Lawrence Yun, chief economist at the NAR.  Any meaningful recovery is not likely to occur before the second half of next year.

HomeGain is a large and vital part of the on-line real estate community with an active population of real estate agents. They ping their own community to get a “boots on the ground” feel for real estate markets. Here is what the HomeGain survey had to say. 69% of HomeGain members believe that home prices will remain the same in the next six months down slightly from the 71%. HomeGain members expressed more optimism in the current survey on the direction of home prices with 22% thinking that home values will rise in the next six months compared to just 11% who believed the same three months ago.

Although the surveys presented show continuing difficulty in all markets, the homegain.com survey results are supportive of a general firming in market tone, across market sectors and offer us some confirmation that we are beginning to see the early signs of recovery.

Here in Washington, DC, our rental market–like most real estate figures–varies so much by block that numbers for the overall city are close to meaningless.

Brandon
You are correct! Even WITHIN block home prices and rental prices can vary. In some areas in NY a derilict building worth relatively little can sit next door to a fairly pricey unit.

It’s amazing how rents can vary building to building & be right next to here other.

Owners pricing a rental have the same issues that agents often run into when they try to list to sell. Too many owners have difficulty coming to market realities. They cause themselves a great deal of days on market time.
Also, the rental market doesnt have sophisticated comp tools. It makes it harder to help owners see local market pricing and really understand changes in the rental market.
If anyone is interested in the few mash up rental tools available on line for San Francisco only, I can point you to them.