Is There A Business Case For Using Twitter? (Part 2) — Communication Tool

My business partner Pat Kitano and I have been thinking a lot lately about Twitter. What is it? How will it impact real estate marketing? In my first article, I acknowledged that at first glance, Twitter looks like an enormously fun waste of time. Far smarter minds than mine have made much the same point — twice!

We believe there is a business case for using Twitter effectively in real estate. I’d like to present several examples here of using Twitter as a communication tool, then follow up later with a more metaphysical discussion.

1. Conferences—Keeping track of the conversation, aka knowing where the cool kids are.

If you’re in real estate and have not been hiding under a stack of open escrows (not likely), you’ll know there were two big industry events last week: Inman Connect, and the REBarCamp pre-conference. Both conferences had an active “Twitterstream” conversation going on, (here for Inman, here for REBarCamp) not a simul-cast, but more of a “parallel-cast” to the actual sessions.

The image below is a sample of the conversation in the parallel-cast during a session on the MLS; note that slight edginess, bordering on rudeness, gets your message amplified: 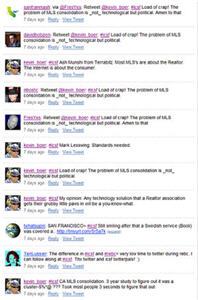 HR Bill 3221, the Housing Stimulus Bill, was just passed into law. To understand the sentiment of the Realtor community about this bill, I sent out this Tweet:
All right Twitterpeeps — Is 3221 a) Good for the housing market or b) A shameless election year stunt? Tag your votes #3221.

Within seconds, responses both positive and negative started coming in:

thomasjhall: @kevinboer – both? if only the banks were req’d to write down the values instead of voluntarily may have had more teeth
BawldGuy: @kevinboer As fix piled upon fix we’re losing our freedom to fail miserably. Massive success nearly impossible when failure less possible.

Using FriendFeed (a Twitter competitor), I’ve been posting regular market updates on news items not important or grand enough to warrant a full article. These updates then automatically find their way into the sidebar of my blog.

“Palo Alto housing inventory currently around 90, just where we would expect it for this time of year.” 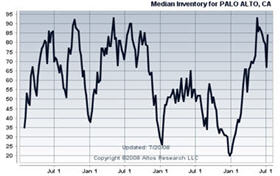 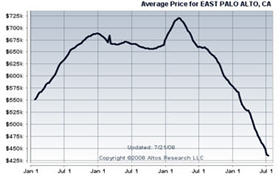 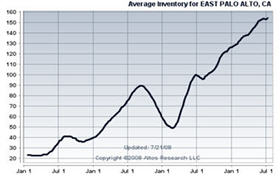