Highlight “Green” Aspects of Your Listings

Visit the website of just about any builder or new home community and you will see a list of the environmentally friendly attributes of the homes. Going green, making sustainable choices, reducing our carbon footprint and environmental impact – these aren’t just buzz words – they are extremely important to today’s consumers, to our communities, and our planet. Don’t let the new home builders get all the credit for their eco-friendly policies. It 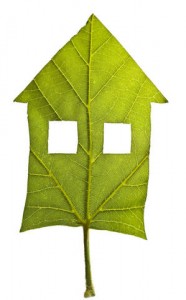 doesn’t matter how many ENERGY STAR® appliances they put in a home, it will almost always be better for the environment to buy an existing home than to build a new one.

Environmentally friendly features are likely to save home owners money as well, as they are often related to energy savings. The financial benefit is especially great when the green elements are already in the home – there are no up front costs such as replacing existing appliances or light bulbs, or installing new systems such as solar panels.

Appeal to conscious home shoppers by highlighting the green aspects of your listings. Be on the lookout for items such as these that may be already present or easily and inexpensively added:

END_OF_DOCUMENT_TOKEN_TO_BE_REPLACED

Is Social Media the Next Step in SEO?

Social Media has become one of the most effective tools in a real estate agent’s repertoire in engaging their target audience. And now, according to search engine guru, Danny Sullivan, data shared through Twitter and Facebook has a direct effect on a search engine results page placement (SERP). Although it had long been suspected in the SEO community, this announcement further confirms the weight being placed on social media interaction. 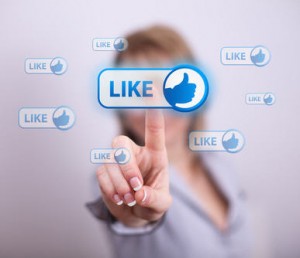 Long held to be of utmost importance in search engine algorithms, Google’s PageRank has been a benchmark of trust by which a website/domain can be easily measured. How does this translate into Social Media? ‘SocialRank’ (Danny’s term, not confirmed lingo used by the SE’s) could very well be the next level of social measurement, which takes an individual and calculates THEIR level of authority on various networks (independent of the PageRank of the page to which he/she is associated). Factors taken into account in calculating ‘SocialRank’ could include number followed/followers, number of friends, number of ‘Likes’, etc.

END_OF_DOCUMENT_TOKEN_TO_BE_REPLACED

We are pleased to announce the Top Performing AgentEvaluator Real Estate Agents of 2010.

HomeGain real estate agents and brokers continued to have a productive and successful year, despite the bleek outlook on the direction of home prices nationwide. We are proud to recognize these agents for their high level of accomplishment in association with HomeGain’s AgentEvaluator marketing program.

In addition to highlighting the 2010 Top Performers Nationwide, by Region and State, HomeGain recognizes agents who had impressive results and are deserving of honorable mentions.
HomeGain is proud to quantify the successes of our AgentEvaluator agents in 2010 and we look forward to continued success for all of our member agents in 2011.

Here are some 2010 AgentEvaluator highlights:

And the 2010 Top Performers for AgentEvaluator are…

END_OF_DOCUMENT_TOKEN_TO_BE_REPLACED

Posted by: Louis Cammarosano on January 24th, 2011 under AgentEvaluator, HomeGain

Last month, HomeGain, one of the first companies to provide free instant home valuations online,  released the fourth quarter results of our nationwide home values survey of over 1000 HomeGain current and former members and 2300 home owners.  The HomeGain survey asked their opinions on home prices and what they thought of President Obama’s performance. On this blog we published the 4th quarter 2010 national results as well as the complete 4th quarter  2010 regional results, including commentary from real estate agents and brokers and homeowners. 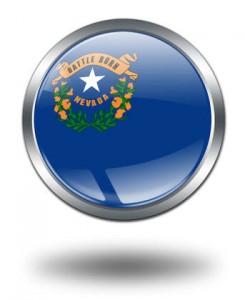 Today we are releasing the Nevada home prices survey results.

HomeGain member Andrea Dugan of RE/MAX Premier in Virginia was recently a guest of Ryan Sloper on the Real Estate Radio Show on 1580 AM The Big Talker. Andrea, an AgentEvaluator® Diamond Club member, follows up Louis Cammarosano‘s appearance on The Real Estate Radio Show and discusses a variety of topics with Ryan, including finance and credit tips, interest rates and more.

Listen in as Andrea shares her valuable insight! (52:51)

Posted by: HG Blog Admin on January 20th, 2011 under HomeGain on Real Estate Radio, Lives of The Realtors

HomeGain.com announced today that it has released the results of its nationwide home improvement and home staging  Home Sale Maximizer™ survey. Past findings from the survey have been a guide for thousands of home sellers in preparing their homes for sale. 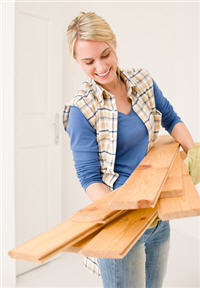 The top five nationwide home improvements that Realtors recommend to home sellers, based on average cost and return on investment (ROI) to sellers, are:

Costs are averages and rounded up. 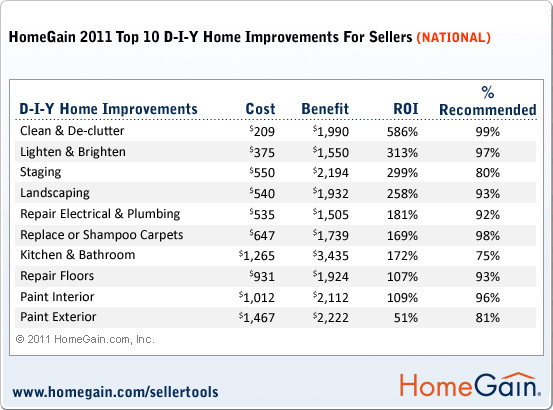 END_OF_DOCUMENT_TOKEN_TO_BE_REPLACED

You are currently browsing the HomeGain Blog blog archives for January, 2011 .